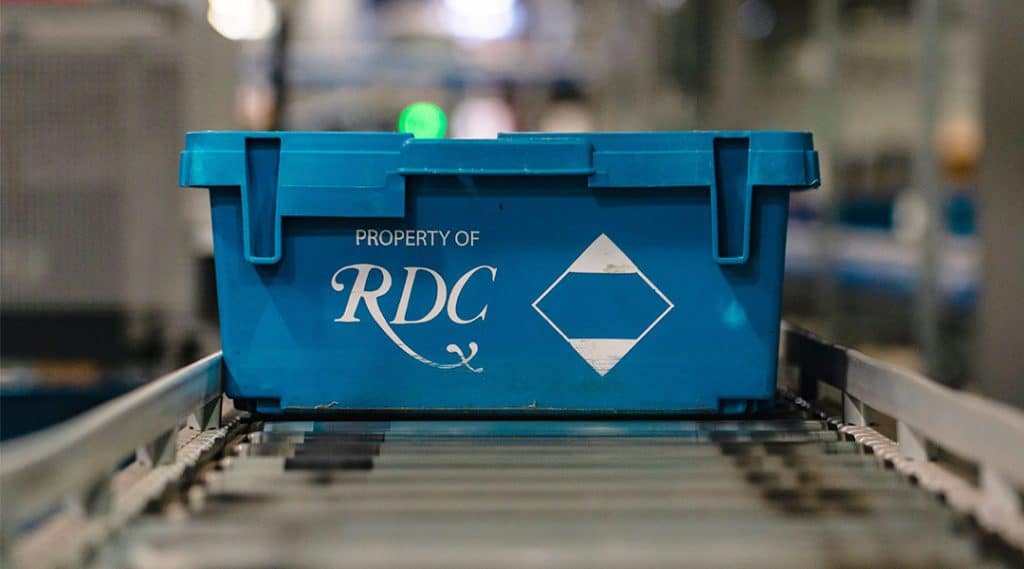 Independent pharmacies across the country rely on Rochester Drug Cooperative (RDC) for their daily shipments of prescription and over-the-counter drugs. At times, the timely delivery of medicines is critical for patients. For RDC’s client base of independent pharmacies who are competing against giants like Walgreens and CVS, that means delivering to patients without delay—otherwise they’ll lose customers to the Rite-Aid right across the street.

To keep these clients supplied, they overnight thousands of shipments every day from a pair of highly automated facilities in NY and NJ. Totes play a critical role in the herculean feat that happens daily. Customers place their orders during the day up until 8 PM. Those orders get picked by workers and placed in totes as they are routed through the warehouses. Robotics handle the totes through a symphony of actions, navigating them up, down and around corners and then lidding, sealing, wrapping and labeling them. In operations like RDC’s, totes are often the most critical moving part: the machines are calibrated to their exact specifications and their ergonomics are directly tied to the productivity of the pickers.

For years, RDC had relied on the same supplier for their totes. The specifications were standardized, so when RDC’s tote stock dwindled or old totes needed to be replaced, they routinely reordered. The fact that the supplier also sold the same models to the industry’s largest distributors kept costs down. The routine worked well for RDC until the day the robots of Rochester revolted.

It happened right after a routine reorder of 1,000 totes was introduced into the production line. The destacking machines started to jam during the tense night shift. They’d work for five minutes and send out 15 or so totes, then jam. The team would clear the jam, restart the assembly line and the same thing would happen. Over and over that would happen 15, 20, 30, 50 times a night. Having reordered totes before without trouble, the team blamed the destacking machine.

After flying in a technician from the automation company and doing some detective work—including measuring the new totes—they discovered that the totes were a different size. When they approached the supplier about the size discrepancy, they learned that the supplier’s big customers had requested some changes to the container molds, which the supplier made without making fuss—or telling RDC.

Even though RDC was able to make some adjustments and make the totes work, the whole incident cost the company thousands of dollars in idle time, tech fees and nuisance costs while the unstandard totes gummed up the works and prevented orders from getting out.

RDC was in a bind with no control over the mold or standard totes that their system was calibrated for. They’d been able to dodge the bullet this time—but what would happen the next time the supplier changed the mold to satisfy their bigger customers?

That moment came sooner than they expected. On their very next order, RDC received a batch of totes that were too big to accommodate. The dimensions had changed too much and the destackers couldn’t be adjusted to work correctly. This second gaffe cost RDC $20,000 in worthless totes and wasted countless hours of labor and production time. Plus it left them dangerously short on containers, so sales had to scramble to collect empties from their clients and pay to have them couriered back.

The tote fiasco put RDC’s client relationships and very business at risk. Pharmacies and patients were counting on shipments, and delays on the assembly line were threatening their ability to deliver on time. Strike two made it clear to the team that without creating their own standard container and controlling the mold so no one would ever change it, their business would never be safe—and neither would the pharmacies and patients who rely on them be.

That was the point that RDC reached out to Flexcon. RDC was opening their second warehouse in Northern New Jersey and they decided to do their totes right from the get-go.

We helped RDC design their own tote and create a mold that they owned so there would never be a change without them knowing. No longer would they be at the mercy of bigger distributors who could dictate the standard tote dimensions with their supplier—and change them without notifying RDC! By controlling the precise dimensions of their containers, RDC would be able to maintain the necessary surplus of totes so they never ran out and they could ensure their totes worked with their sensitive robotics no matter how many times they reordered. They’d be set well into the future if they expanded or added a facility because the totes would be the same.

Flexcon designed the perfect container for RDC by taking the best features of their existing totes and looking at their needs anew. The end result was an efficient design with enhanced performance features that was perfectly calibrated to their robotics.

“Flexcon’s ability to provide the perfect container continues to ring true. From design to manufacturing to delivery, every part of the process was handled professionally and with the perfect solution for the customer always in mind.”

CONTROL OF THEIR OWN MOLD. This has led to several successful reorders with no size discrepancies, saving RDC tens of thousands of dollars in hard costs, soft costs and nuisance costs.

MAXIMUM VALUE FOR THEIR INVESTMENT. By adding a few modifications for strength whether they were shipping or nesting, their totes will stay in service longer.

REDUCED TOTE NOISE BY 50-60%. By cambering off the sides a little bit more, we were able to prevent the totes from bouncing. When applied to the hundreds of totes in motion at once—the difference was significant.

SYSTEMWIDE CALIBRATION: Totes designed to perform through all machinery from destackers and labelers to lidders and strappers.

WORKER SATISFACTION. Ergonomic design makes it easy to lift one tote or a stack of them. Little finger grips on the side make it easy to pick up properly without the danger of encountering a sharp edge.

RDC is so pleased with the system of totes Flexcon developed for picking and shipping dry goods, that they engaged Flexcon to develop a system of refrigerated totes for shipping products that have to be kept at a constant temperature. These drugs are sensitive and can be expensive—up to $70,000-worth can be contained in a single tote. RDC stocks close to 500 refrigerated SKUs that can be in transit for up to 12-14 hours. The months-long design and testing project will produce totes that work efficiently alongside dry totes on conveyors and pallets while reducing the risk of spoilage. 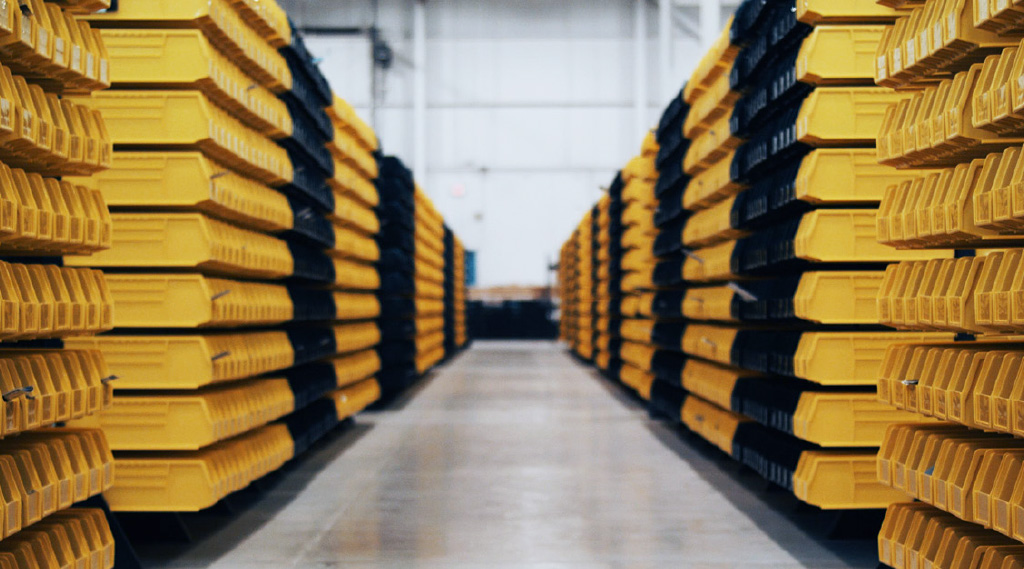 Ecommerce innovators are leveraging containers to perfect their supply chains